Living the Dream: Badger and her lost eye 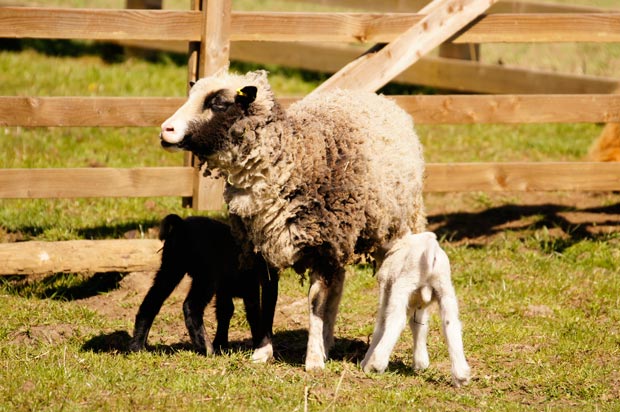 After last weeks traumatic soaking we have been trying to get things dried out and at the same time have been working hard to ensure it doesn’t happen again. Initially I spoke to our neighbour down the lane, who had brought a digger in to use on the day of our flood and enquired about using the digging skills of one of their sons who was keen to help out. We then had James come around, with digger in tow to create a rather large barrier between the fields and our barn, which is home to our new business. Needless to say he did a wonderful job as the resulting trench has been running constantly off the fields and now we can put longer term plans in place for the future.

Well, we have had no let up in dramas around here this week. It started early one morning whilst out getting organised with the animals when I noticed that ‘Badger’, one of our shetland sheep, had become a little stand offish and believe me with her appetite, this was not like her. After a little bit of running around, phew, I managed to take a look at her and could see that her left eye was infected. I called out our local vet and very quickly he established that she had in fact cut the eye itself and as a result would need to be operated on and she would need to lose her eye. We think that she has damaged her eye whilst feeding through the hay feeder. As I mentioned earlier, she has a very good appetite and so she likes to get her head stuck right into the hay to feed and this is where we think she has damaged her eye with a rogue piece of hay.

All the plans were made and after keeping her indoors for a couple of days and off food and water for a time, it was time to take her for the operation. As Wendy was keen to ensure that ‘Badger’ didn’t do a runner, around Market Weighton, after transporting her to the vets, she sat in the back of the landrover herself. This was both to continue her nursing duties whilst we travelled and to take hold of her as we reached our destination, so she couldn’t engineer an escape route and make a bid for freedom. Although, in my view that was never going to happen, as she has far too cushy a life at our place anyway. Everything went according to plan and things appear, at this stage to have gone very well and she is now home and will return to the flock in a few days, with her stitches being taken out in a fortnight, fingers crossed.

In closing this week I wanted to mention about or recent trip we took over to Helmsley, which is a beautiful town which we enjoy visiting when we can. There was nothing out of the ordinary with this trip other than this time we went to visit ‘The Stick Man’ who works up by the walled garden. I wanted to pick up the final pieces I needed to complete the stick I was making for my Dad for Christmas and wanted it to be just right, as I hadn’t made a stick before. I went in with ideas of what I thought I still required but left the shop with some great advice and an explanation and all the bits I needed to get the the job completed using traditional methods and they’re such lovely people too!