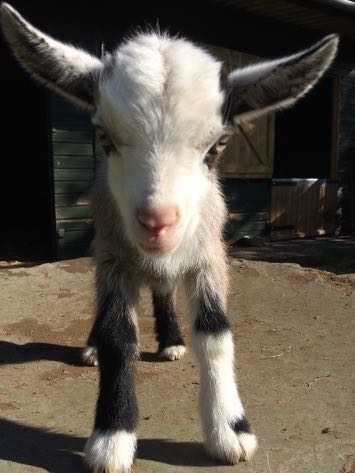 Don’t you just hate to see bullying going on. For the last few weeks I have been witnessing it a lot around the farm in one way or another and I don’t like it one bit.

A couple of years ago, Stacey, one of our goats had a kid, whom we called Bambi. Life was sweet and the two of them, mother and daughter, got on great and that continued all the way through until recently when they both gave birth to sets of twins. For whatever reason things all changed from that point in time and Bambi began to bully her mother. I’m not sure why, was it because she was jealous that Stacey’s attention was now taken elsewhere? Was it because she felt the need to be over protective of her own two kids? or was it that she was just down right mean? I may never know the answer, but what I do know is that I’m not going to stand around and watch whilst the bullying is going on, and that goes for the other animals too. We have not only had this going on with the goats, but it’s been in the pig pen, the sheep field, the cow meadow and with the chickens too.

With all this bullying going on around the place, it took me back to when I was much younger and witnessed bullying as a child, whilst at school. Now as much as I’ve always been short in stature and back in those days I was definitely a ‘ginger nut’, I was not the one getting bullied. Why? Because I was never going to allow myself to be bullied. Back in those days I had a temperament which matched my hair colour and so, little or not I was always going to be standing up for myself. I recall on many occasions, that I would get involved in other peoples battles, because I saw from the outside that somebody was being bullied. I was wasn’t going to stand by and let it happen, if I could do something about it. All too often I couldn’t do a great deal about it as I was half the size of the bullies, but never the less I tried and was surprisingly successful on numerous occasions. That I suppose is the benefit of having a rather large gob and sounding mean, well maybe not the sounding mean part! I can remember as a 20 something, being out on a walk with our dog ‘Ziggy’ and came across a gang of youths chasing two girls, eventually catching up with them and soon began physically abusing these same two girls, laying into them. As was normally the case, I didn’t think twice, shouted the dog and we ran across the playing field we were on to reach this unsavoury activity which was going on. I waded in, again without thinking much about it at all, until I had done enough that these two girls, now battered, bruised and crying could quickly get off home and leave this gang behind. It was at that point that I felt a whack around the back of my head and turned to see further youths on the scene with one of them wielding a length of 2 by 4 timber which he was just swinging back to take a second strike at my bonce! Well, ok, maybe I did come off worst sometimes, whilst standing up against bullies, but whilst I have any sort of influence with these bullies, I’ll forever be using it, on the farm or off it!