Living the Dream: Can I hear the patter of tiny hooves? 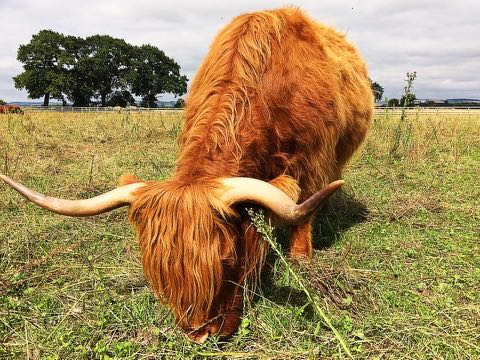 The excitement around here has been building over recent weeks, with the long awaited Highland calves now overdue. We weren’t quite sure when we would hear the patter of tiny hooves, but just knew the nine week window in which to expect them. For the last 6 weeks I have been up and down the field, checking for progress, morning, noon and night and there were plenty of signs that things were progressing, so we just had to be patient.

After talking to my friend Pete, I had confirmed to me that a growing udder, increased size and maybe movement on the right hand side and some changes going on around their rear ends, were the main things to be looking out for. Obviously some of these signs were very apparent from a distance, but with all that long hairy coat, there was no chance that I could see if their udders were growing, unless I took other action. Now bearing in mind that both heifers, Lyndsey and Flora had personalities which could cause me problems when checking out their udders, I had to be a little cautious and take things steady. Firstly, with Lyndsey, as she is very stand offish I had to put her in the race in order that I could have a good look at things. The problem was, that unless I had other udders to compare with, I didn’t know if she was growing or not. Well that meant that I now needed to check on Flora as a comparison. Flora, as the the most temperamental of our cows always seemed to be in a mood or having a strop, but things appeared to be changing for the better. As the father of six kids, I’m sure, as I think back a few years, I have witnessed on a number of occasions a significantly improved temperament during the latter stages of pregnancy and so maybe this softening of Floras attitude was a sure sign that birth was close. I was now able to walk up to her, day or night and stroke her head, her face, her back and then she was more than happy to allow me to head down below to have a rummage and check out her udder. It’s like she was a new cow….transformed. She would lay like a very large beached whale in the field each night and wouldn’t move a muscle as I came over and gave her a cuddle and said goodnight. Obviously what I was really doing was checking for calf movement inside her and as Pete told me, ‘look out for her tummy bouncing back’ and there was plenty of movement and bounce back in there .

From the outside it looked like things were all progressing nicely, but then disaster struck. I watched in horror as Monica and Morag both mounted Lyndsey in front of me, which was a sure sign that Lyndsey had come into season, so there was no calf from her this year. My last hope lay with our Flora, but before long the possible nine week window came and went. I tried to console myself by reading others experiences on line, where they had heifers giving birth up to three weeks after their due date, so maybe this would be the case for us too.

Well, this revised hopeful period came and went, but without our calf being born and so the time had come that I had to face up to the fact that this was once again not our year and all that movement must just have been wind!