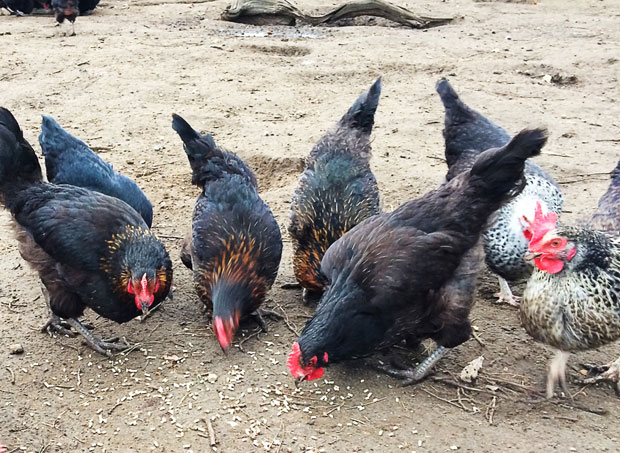 Whilst taking visitors to see our animals this last week we had a bit of an incident with a friend of mine who had brought his family to see the farm. I won’t mention his name for fear of embarrassment and the countless years of ribbing he would undoubtedly receive from his family and work colleagues as a result of such humiliation.

We were coming towards the end of our farm tour, which meant we needed to walk through our farmyard where the pet hens live. Hens… the look of fear swept across his face as he rapidly turned pale. “It’ll be fine,” I explained as I encouraged him through the gates. “They’re too busy with dust baths to be bothered about you.” I carried on to talk about our goats who were next on the tour. “Come closer” I beckoned, but to no avail, “I’ll just stand over here,” he replied. He couldn’t stand any further away if he tried. As I chatted on to the visitors, now explaining about our visiting swallows, I saw movement out the corner of my right eye, the hens were on the move, bath time was over. Before I knew it, things were quickly turning pear shaped, with ‘Rita’ our most inquisitive grey hen leading the charge as three hens rapidly entered the yard.

The visitors, both adults and children began to ‘ooh’ and ‘aah’ at the hens, that is, all but one visitor, because that one visitor was running for his life through the yard with Rita in hot pursuit. She was only being nosey and wouldn’t have gone anywhere close to him. No one has ever got close enough to her to even give her a stroke, but as he tried to escape her clutches all he was doing was panicking her even more. It was quite a sight and one I never expected to see, with this 40-something friend of mine running for fear of his life, round and round in circles, until he eventually got close enough to the gates to escape to safety. All my subsequent encouragement had no effect at all and he stood leaning on the gates, which was now his safety blanket between him and these feathered creatures, who would have to wait for another day to get close to Jay (dash, wasn’t supposed to mention names).

This week I too have been doing a lot of running around. After six months, Frank and Betty, our parent Aylesbury ducks, have decided to widen their horizons and venture out of the farm and onto the neighbouring lane, which runs along the front of Long Meadow Farm. No amount of discouraging has been able to put them off wandering and so when our backs are turned they tend to wander. We check regularly, but it’s usually visitors that let us know they are playing ‘chicken’ on the lane or alternatively we hear a car horn encouraging the ducks off the highway and we spring into action, to once again escort them back into the farm.

This turn of events almost always means that we need to waddle Frank and Betty through the tea garden thus enabling visitors the chance to witness my now famous duck herding skills, as they are manoeuvred between tables and chairs and back out onto the green mile where they should be. If things continue, I may have to get the pancakes out! Only kidding.