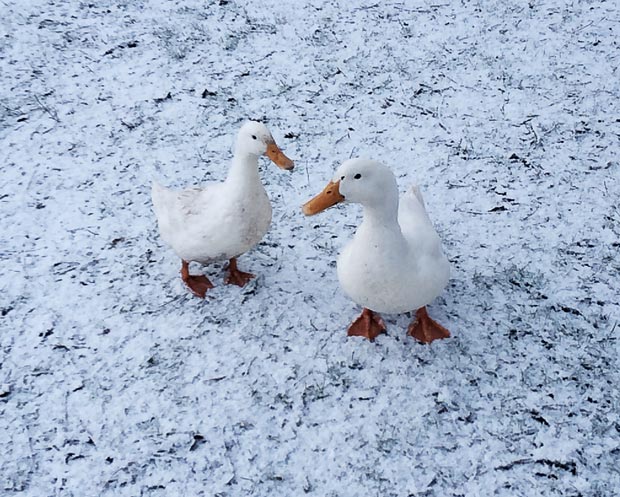 This week created another lesson for me and I hope I’ve learned it.

I was in a rush, trying to get all the animals fed and watered before getting off to run a few errands. I was all set to feed the cattle, although they still had hay in their feeder I thought I would just top it up with a couple of bales.

I barrowed the hay out to the field, opened the gate and quickly rushed in and as I threw the first bale into the feeder, I realised that I had made a grave mistake. I hadn’t switched my footwear and so wasn’t wearing my wellies and was more than ankle deep in mud and unmentionables, which by this point was even between my toes. Wearing trainers in that situation was never going to be a good idea.

The gang has once again been increased this week, with the addition of our two beautiful Aylesbury ducks, Frank and Betty. They appear to have settled in really well and have become acquainted with many of our other residents. I’m not sure how well they will get on with Fleur, our solitary Muscovy duck, as so far they have been keeping their distance from each other.

One of the big surprises with the new ducks is the fact that they take themselves to bed and let me tell you, that’s a very big bonus around here.

Brock, one of our young Shetland sheep, this week took it upon herself to make sure she got her fair share of breakfast. She decided to squeeze her way inside the hay feeder and then promptly made her way onto the top of the hay.

The problem arose after she had eaten all she could eat and then tried to get back out of the feeder. She was going nowhere fast and I had to intervene to let her once again taste the freedom of her field.

Wendy has had a really busy time of late, with getting the vegetable patch into shape for the fast approaching springtime, as well as cleaning the greenhouses, clearing beds, fertilising soil and preparing countless seed trays for the onslaught which will soon be upon us.

I have also roped her in to assist me in dagging duties out in the sheep fields. This time roles were reversed though, it was Wendy catching the sheep, putting them on their backsides and keeping them calm, whilst I had the messy job for a change, working down at the other end where all the action happens.

On top of all that outdoor work she has been chalk painting anything and everything that stands still long enough to get her tin open. That of course is all preparation ahead of our new shop and tearoom opening.

On Saturday morning, I think I must have had a funny turn. During the hailstorm we had, I was half way through my weekly stable blitz, when for no apparent reason I burst into song.

If any of you have watched the 1970 musical version of Charles Dickens ‘A Christmas Carol’, with Albert Finney, you would recognise the song ‘Thank You Very Much!’ from the end of the film.

I don’t know what came over me but the hailstorm or the fact that I stank to high heaven wasn’t going to dampen my spirit and I was just so pleased to find myself where I am doing what I’m doing with my family around me. I’m a very lucky boy, I’d say.