Living the Dream: Long grass lessons and a raging goat 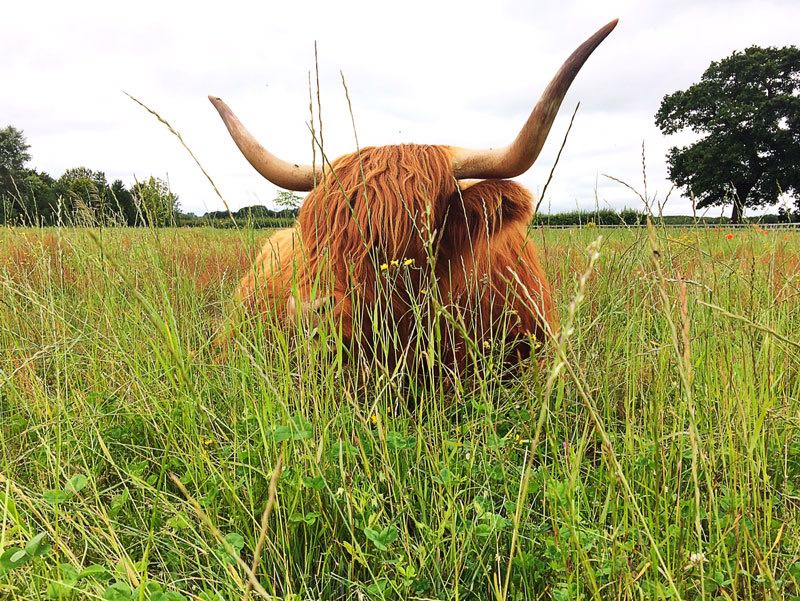 You may recall, that earlier in the year I had our top cow field ploughed, harrowed and seeded. After initially struggling due to a lack of rain, the seed kicked into life a few months back, and has been flying ever since. My biggest concern recently has been the timing of when I let the cows back into it. I didn’t want Lyndsey and Flora, who are in calf, to be eating too much and therefore produce large calves, which could cause them problems when calving and, if they gave birth in the top field, we wouldn’t know it anyway, as it’s so long!

As it happens, I got fed up watching them longingly stare at the new grass through the fence and so this week I let them into the top field. It was like Christmas for the girls, they galloped in there, well maybe Monica didn’t, but she’s an old girl at 19 anyway so she just sauntered in as she does, but needless to say they love it. In parts I can only just see the tops of their heads and when they lay down, I’ve got no chance and have to go in to check on the pregnant cows several times a day.

Each evening I’m putting them back into the middle field, with the shorter grass, so if they calf during the night, it’ll be easier to see and deal with. I learned another lesson this week. When filling up the water trough, don’t ever leave the hosepipe in the tank after turning off the tap and unplugging it. If you do, in error, leave the hose in the filled trough you will find that as quickly as you filled it up, it will empty itself backwards down that same hosepipe. Well, I’d never have thought that would happen….but it did!

After last week’s goat fest around here, I had hoped things were settling down in the goat pen, but alas, that wasn’t to be. Those little goats have got so much energy and if they’re not sleeping, they’re bouncing their way around the place, at break neck speed. Other than coping with them burning off all this energy, we have had a bit of a situation to deal with. As part of my morning farmyard routine, I take care of the ponies ahead of the goats. As I was sorting out the ponies one morning this week, I could hear clattering and banging going on in the next door stable.

Each time there was a clatter, there was also a squeal immediately after. I went to investigate further and discovered that Bambi, the younger of the two goat mothers was for whatever reason, giving Stacey’s little boy a clatter, if he went anywhere near her. I had stern words with Bambi, on a couple of occasions, but my words fell on deaf ears and she just continued to be nasty towards him. He, on the other hand, was just attempting to stay out of her way and was rather subdued as a result of her actions.

My plan has always been that I’d move the goats to a larger pen when the kids were born, where I have built a climbing frame and see-saw for them to play on. I have subsequently moved Stacey and her twins up to the new pen and after they’re settled in, I may move Stacey and her two also, but only if she behaves herself.