Living the Dream: Mac gets thoroughly stuck but keeps his appetite 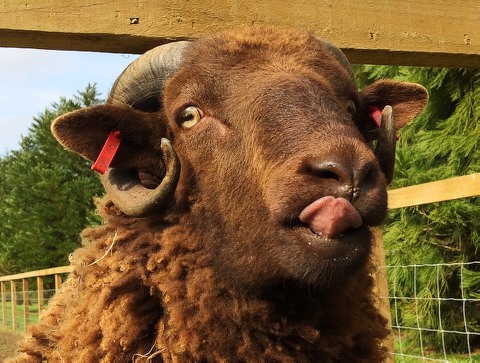 The day started off like any other, up early, out quickly, it was a bright morning, hurray! I was all organised, but on this day for whatever reason I decided that I would sort out and feed the animals in reverse order rather than follow my normal routine. Well as it turned out, it’s a blumin’ well  good job that I did too. Well, it’s not what you expect to find at that time in the morning at all, is it? To be greeted with a backside up in the air. As I walked across the field, I automatically surveyed the field in front of me, to see where all three residents, Miguel and Marguerita (Marj) the Llamas and Mac the tup, were located in the field. I could immediately see Miguel, as he stands out on any day with his striking, regal looking, white head, against his brown body and then I spotted Marj, who is completely brown, as she lolloped out of the shadows and across the field to meet me.

That was only two of the three accounted for, so where was that little monkey we call Mac?  As I reached the perimeter fence, I searched across the field to see if I could see him and eventually I did, but the view I had of him wasn’t at all what I expected. It appeared from where I was standing that he had found a tasty treat at the fence bottom and was bent down, on his front knees, with his rear in the air having a nibble. It must have been good, because when I called him over, he didn’t make any attempt to come and see me, now that is unusual. I walked around through the gate and up the field towards him, to see just what was so interesting for him not to come over. It was then as I got close to him, that I could see that he was in fact attached to the very bottom of the fence by his short and curly horn, which explained why his rear was in the air and he never came over when I called. And there was I thinking he didn’t love his Dad anymore! I had no clue as to how long he had been in that position, he may well have been tethered like that all night, but anyway, now I just had to release him and give him his freedom once more. That was easier said than done. He had somehow twisted and curled his horn through the stock netting fence and heaven knows how he did it. I had to turn not only his head, but his whole body in order to somehow work his horn free, bit by bit from each part of the fence and all the while he was making no attempt at all to help me in the process. I came to the very last part which was stuck and with an almighty tug, the fence twanged as his horn was released and he was once again free to roam. For a moment I did expect the Llamas, who had been attentively watching on from the sidelines, were going to offer a round of applause, but unfortunately not.

Mac immediately knew what was coming next, either that or he thought he would be in for a good telling off and so he galloped down to the other end of the field and stood where he does every morning as he awaited breakfast being served. I didn’t even get a thank you! Sheep eh, who’d have ‘em!