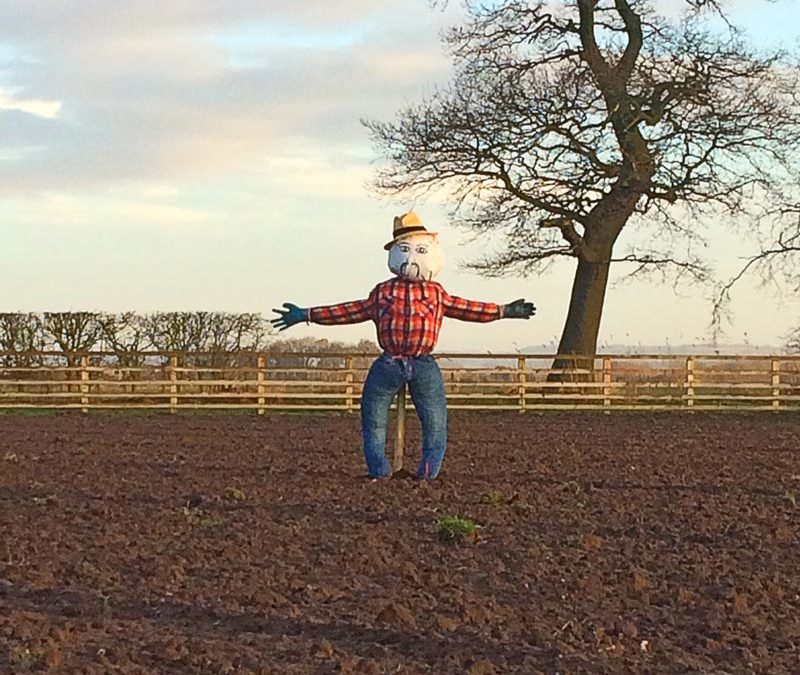 A few weeks ago, as you may recall, I managed to get the top field seeded with grass. I was quite pleased with myself and thought all in all that a good job had been done and I could now sit back and watch it grow. Well that was before I had visitors arrive and suggest otherwise. Only a few days after the field was sown I noticed, as I walked up the green mile each morning, that as I got close to the field, a flock of pigeons would take to the air from in that same field. Not good at all. Each day it looked like this gang of pigeons was growing. I found that I could whistle from well down the field and I could clear it completely, as a result, but that was never going to be enough to keep them off my seed. So I needed a plan B.

Immediately I knew what I could do, I can make my very own ‘Worzel Gummidge’, so that’s exactly what I did, well sort of. I looked out an old pair of jeans, that had seen better days, a lovely checked shirt, I’d not worn in years and a straw hat which was ideal for the look I was going for. I gathered together those bits I required, like my tools, some lengths of wood, nails, baling string and parked myself beside the straw bales at the back of the barn. It wasn’t long before he was almost complete, but there was a problem, he had no head. So by using an inside out animal feed bag I was able to make him a head, that fitted just right on his broad shoulders. After giving him a face and parking his hat on top he was, as Fireman Sam would say “ready for action” and so after getting the teashop staff to give him the once over first, he and I took a walk up to the top field. A few minutes later he was in position, proudly standing his ground in the centre of the field and was all set to see off any marauding pigeons who dared to come near. Now it may just be me, but do you know, he does actually seem to be doing a cracking job. I have seen no pigeons in there at all since he arrived and I’m up and down there many times every day, dealing with the animals or walking the dogs. So hopefully, it’s a job well done!

As I was doing my rounds the other night, I was walking through the yard gate when I happened to glance to my right and I did a double take. In the drainage pipe that runs under our car park, my head torch was reflecting off two eyes that were watching my every move. I stopped, rooted to the spot, not looking away, but kept the torch light beam on the eyes as I carefully made my way closer. I climbed over the fence around the ditch, making sure I didn’t look away, thus diverting the beam away from the target, I was keen to see what creature this was that was lurking in the depths. Then the cutest thing happened, the eyes blinked back at me and that’s when I knew what it was and moments later as I got close enough to see, my thoughts were confirmed, it was Mr. Frog. Now I’m not sure wether he was out courting or just hunting for his supper, but either way it was nice to meet him anyway.