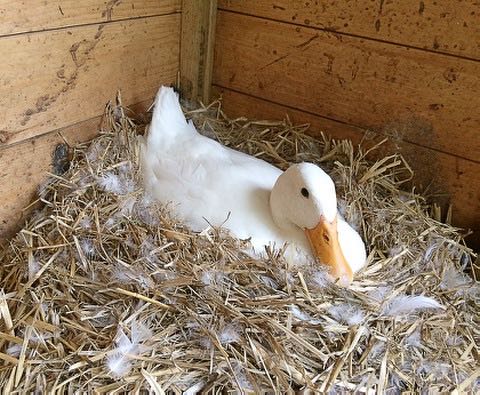 Our Betty’s been in a right mood all week! Generally she’s been staying in the house and keeping herself to herself, but all of a sudden her mood just changed and it’s not a pretty sight. I have obviously discussed her with Wendy and you’d think after living with females for over 33 years now, I’d understand them a little more, apparently not.

She has got awfully lazy of late too, spending much of her time just sitting on her rear, in her room, being anti-social. Only yesterday, I was minding my own business getting on with things, but when I walked past the house, she literally flew out of that front door ranting at me about something or other. If only I could understand what she was saying. As Betty is an Aylesbury duck, I didn’t have a clue what she was saying.

I can only put it down to her hormones being all over the place and getting bored ridged having to sit on that nest of eggs for most of the day. Well, you’d be the same wouldn’t you? I learned yet another lesson this week: never leave your newly collected eggs on view for even a minute. I had finished my morning rounds and everyone was fed and watered. I’d collected the hens eggs and was all set to give them a wash, but decided to give them a quick hot water rinse and sit them in the sink whilst I put the wheel barrow away. Big mistake! When I returned to wash them, in what can only have been a minute or so, they had disappeared, well almost.

The sight that welcomed me, from 11 eggs, was one broken shell and the remains of one yolk, the rest had vanished, but the footprints gave the game away… rooks! They must have been watching me, thought Christmas had arrived and seized their opportunity to grab a free breakfast. Although I wasn’t a happy bunny at all, I was impressed with the speed that they had executed their plan, not that it helped me, because I was now almost a dozen eggs down and my ears were about to start ringing from ‘er indoors, for not having enough eggs for the teashop.

I then had to quickly go and sing a little more to the hens to encourage them to lay and once again, they duly baled me out. Over the last week, just as dusk is falling, we have been party to a real treat around here. There are currently two newly fledged, young tawny owls who come to life at that time each evening and it is such a joy to see.

On several evenings we have been able to walk quietly up to the tree they are in and stand right underneath the branch that they are sitting on and look up at them, as they stare back, blinking slowly as they do, wondering what on earth these clowns are doing staring up at them.

Did I ever tell you that Wendy bought me a fancy watch for Christmas? It tells me what the weather is doing, it gives me the day’s date, it relays any messages I receive on my phone and it can play my musical choices which are also on my phone. I can even tell the time with it. But best of all, it has come into its own this week as it told me that I had covered more than 5,000 footsteps in just one afternoon by chasing flamin’ runaway lambs – now that has to be a real boon!