Living the Dream: New arrivals in the goat pens 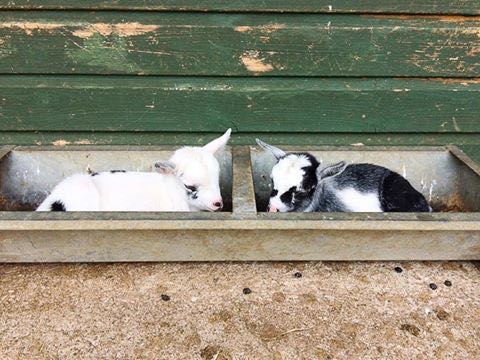 It was a sunny Thursday afternoon and time to give the cows some hay. I’ve been holding off putting them into the newly grown top field until our calves arrive. So I’ve been topping them up every so often, without encouraging them to be putting on too much weight as I don’t want them to struggle giving birth by having whopper calves.

Anyway, whilst sorting them out, I could hear Bambi, one of our goats, bellowing away, down by the stables. Being heavily pregnant she had been moaning quite a bit over the previous few days and so it appeared that things were at last starting to move towards the new kids being born. She was getting steadily louder and louder, but I needed to let my ginger ladies out of their pen before I headed back to the farmyard.

Just moments later I was hurtling back down the Green Mile, the anchors were slammed on, engine off, parking brake on and I leapt off the quad and through the two sets of gates and into the stable where Bambi was standing looking very pleased with herself. Dash! I missed it! There she was busying away cleaning up her newborn kid, a girl, who incidentally is her complete double, with a black front end and a completely white back end. At the top of my voice I shouted for the troops to come and see what was going on and before I knew it an audience of admirers had congregated at the stable door to coo over the new kid on the block.

Just when we thought that things were settling down, our Bambi, surprised us all and no more than 20 minutes after the first birth, she popped out her second kid and again it was a girl. This one was very different from the first and as much as the first looked like a double of it’s mother, the second looked like exactly like dad! Wow, that was a lot of excitement for one day, two girls born to Bambi and now we just had to wait for Stacey’s baby to be born too and hopefully, that wouldn’t be a long wait.

Sure enough, we didn’t have to wait long at all, as the very next day, Stacey, who happens to be Bambi’s mother, started belly aching just after lunchtime and by five o’clock, she had also given birth to not one, but two kids as well, but this time she had a boy and a girl. The boy looks just like his mother, but the little girl is something else. She has a striking white coat with several jet black spots dotted across her body, she’s just beautiful, but they all are!

We are now only a few days since birth and both mothers are doing a great job and after a few hiccups with little ones attempting to feed from the wrong mother, things appear to be settling down nicely. The kids are already getting into mischief and skipping around their pen like mad things, so I can see that we are in for a great deal of fun and mayhem over the coming months. With fun in mind, I have been busying away moving some residents around this week. The hens have moved into a new enclosure, which then freed up their old house for the goats to move into in the coming days.

I have also built a climbing frame for the goats and a lovely see-saw too, so they’ll have plenty to keep themselves busy and hopefully out of mischief.