Living the Dream: The discovery that never was 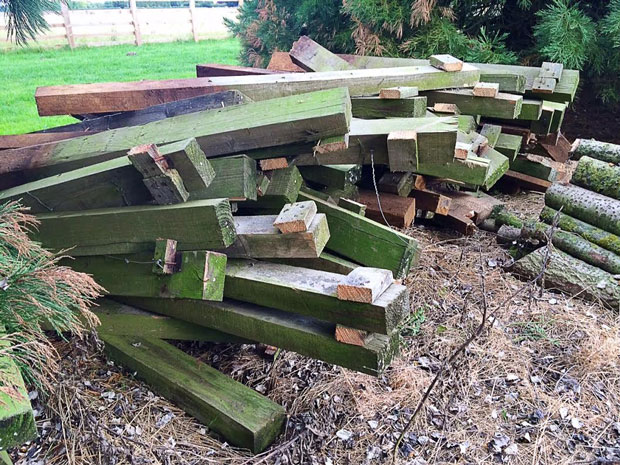 This week has reminded me what it’s like to work under pressure. Ahead of our shepherd huts being delivered in the spring we need to get one of our fields landscaped in readiness for their arrival. In preparation for that happening I have arranged for the field to be rotovated, ploughed, levelled and seeded to grass. That’s where the pressure starts to come into effect, as I have needed to get a couple of jobs taken care of before the tractor work can begin.

Surrounding the field in question there is almost 300 metres of fencing. Now, this isn’t just easy to shift fencing (well for me anyway) as the 5×3 posts have been buried a couple of feet into the ground, topped with a rail and have several layers of stock netting and chicken wire attached to the posts, which have been added over quite a number of years, to keep livestock secure. So that the best job can be made of the ploughing, I have been removing all of the old fencing and my goodness has it been hard work, especially when you know you have a deadline. I’m not quite there yet , but am well on the way to finishing. Thankfully, parts of the job have been made a whole lot easier by utilising my quad to the full. It’s quite a satisfying sound, listening to the engine growl and the netting snap away from the fence posts and snake behind you like a leaping cobra.

Incidentally, whilst clearing the fencing I made, what I thought was a major insect discovery, something I had never seen before and boy was I excited! My excitement was somewhat short lived, as the life changing discovery wasn’t the extremely rare albino earwig that I thought it was, because after googling such a find, it turns out that it was just a juvenile earwig which had just moulted. What happens is that they are white in colour until their hard shell darkens over time. Oh well, it was exciting for a little while anyway!

Another of my jobs was to cut back many of the overhanging oak trees, in order that the tractor could reach into the field edges and corners. I had visions of me standing on top of my rickety old step ladders, trying to make the most of every single inch of my 5’ 6” (and a half) frame, whilst trying to control the chainsaw in the process. Never a good idea! Thankfully, I was offered the use of a more suitable tool to get the job done, rather than risk losing a limb whilst doing the job. In the end, the job which I feared would never get completed satisfactorily, was done and dusted in a couple of hours and I once again had a whopper of a bonfire, to get rid of much of the waste. The remainder of the waste was cut up into logs, for us to use later.

I was doing lots of pacing on Sunday, up and down the green mile. “Why?” I hear you ask. Well I was all excited for the return of our missing ‘Ginger Cows’ who were returning after their romantic interlude with Mr. Bull down in South Yorkshire. As the trailer pulled through the gate, Morag and Flora galloped across that field, how they knew I don’t know, but they did. It was amazing to see their reaction and it’s great to have Monica and Lyndsey home again. Let’s just hope that things went well and we hear the patter of tiny ginger hooves come April time.