Living the Dream: The great escape 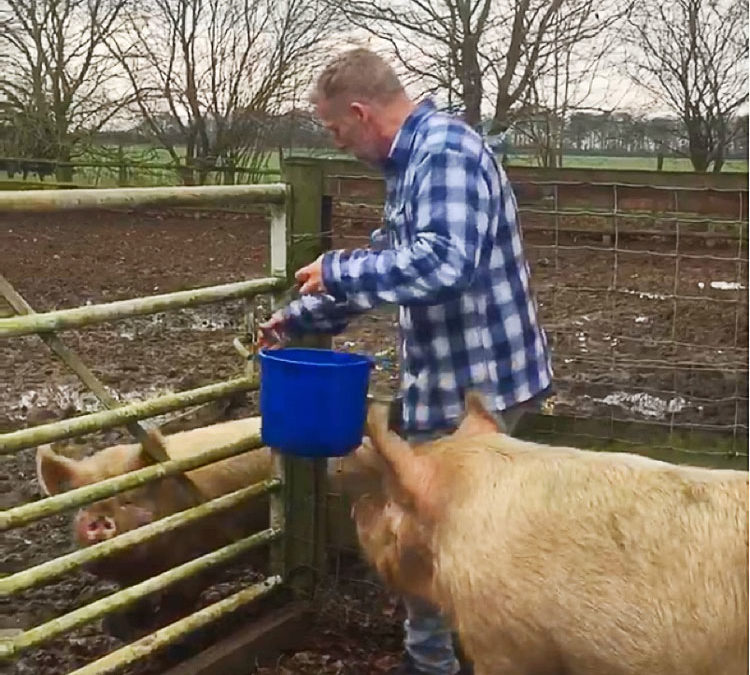 “Dad!, Dad!, there’s a pig leggin’ it about out here!” Why is it that every time I get organised to sit down and focus on a job, something drags me a way from it. I rushed through from the study to the front door and lo and behold, Olivia, who had called me, wasn’t kidding and ‘Precious’, one of our pigs was now heading straight for the front door. Maybe she fancied a warm by the fire, after all it was a very chilly day. I quickly bunged some shoes on, said to Olivia, just watch her for a minute and I ran into the barn, being sure that I closed all the doors behind me. In literally seconds, I was heading out through the doors at the other end with a bucket of feed in my hand.

As I came around the corner, Precious spotted me with the bucket, which she clearly recognised and came galloping towards me outside the pig pen. Now, if I said that for a pig Precious isn’t a little lass at all and at a year old stands over waist high to me, you will understand that I didn’t fancy getting in the way of her when she reached me, which didn’t take many seconds. Now, I’m one for making things extra secure when it comes to keeping animals where they should be, well I thought so, until today, but anyway what I do is tie the pigs gate tightly shut with baling twine, just in case they ever fancied having an impromptu wander. So, with the gate being tied up, as well as bolted I couldn’t just easily let her in without cutting the string first and all the while, this little piggy was looking for afternoon tea. It’s just as well that I keep my knife in my pocket and so moments later she was being welcomed back into the pen by petal her house mate. I ran around to the back of the pen to feed them so they were occupied for a few minutes.

When Olivia first called me, I knew exactly why Precious was out and how she had escaped, because in reality, I suppose it was my fault. I had disconnected the battery for the electric fence, in order to charge it and even though it had only been overnight, it was just long enough for the menace to suss out that there was a route out to adventure land. I fed the pigs some more grub and grabbed the recharged battery to reconnect things up once again. Now, overnight the pigs had trampled the electric wire into the mud and so I had to hastily replace some of the wire, feed it through the connectors around the perimeter fence and get it all sorted to switch back on again. I could see that without the fence being switched on, she had tunnelled her way out for a wander. After connecting everything up I ran back around the pen to check that the fence was working all the way around…..for some reason it wasn’t, oh! I hadn’t switched it on. I ran back around to the front, switched it on and ran back, checked it again and still it wasn’t working. I ran back around and in my haste hadn’t connected up one small wire which I promptly did and ran back around the pen again. At last, thankfully it was working. I was jiggered, up to my ears in mud and had got two electric shocks for my efforts, but hey, all’s well that ends well!