Living the Dream: The joys of a frosty morning! 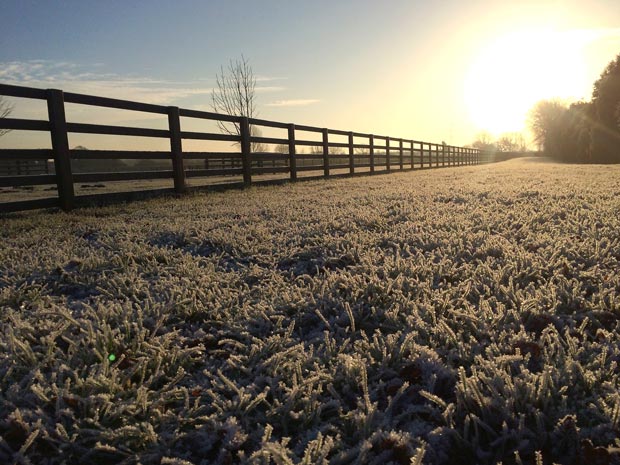 Well, I can’t really complain about the cold at all, can I? I have been moaning on about the rain stopping for weeks and thankfully it seems to have moved on, for now. The only thing being is it has just brought different challenges to deal with. We have experienced many cold nights since escaping out to the country and so far none have been as cold as the minus 17 we had a few years ago, but back then we had underfloor heating throughout and a heating system that worked.

Sunday morning came along and I expected that I would be welcomed with a blanked of frost and  as I quickly got organised and stepped outside, indeed the expected blanket was awaiting my arrival. Now, very quickly it became apparent that the frost had been sharper than I had anticipated. When I broke the ice on the old cast iron pig feeder, which the pet hens use for water, it seemed much thicker than normal. In fact, only moments later, when I came back to it and it had frozen solid once more, that’s when I could see that I was in for a fun morning!

I went about my work, sorting out our pet hens, Layla the bantam and Fleur the duck until all were fed and watered. I moved onto Maisie and Lucy, the shetland ponies, who are always excited to see me. Fed, watered, mucked out and then onto the goats. Gavin, Stacey and Bambi all seemed in fine fettle and were set up for the day. I was on a roll, or so I thought! As I pushed my barrow full of sheep, cattle and poultry feeds out through the first gate onto the green mile, I got the obligatory morning welcome from the usual suspects, Delilah, Kehna, No.25 and Rocky (all sheep) who will always be the first to let me know that it’s breakfast time, wether it is or not.

It was then I noticed an unexpected welcoming party awaiting my arrival. It was 2 of our Black Maran hens, who were on the green mile and not tucked up in their beds, as they should’ve been. As you can imagine, I was then trying to figure out, how this could be. Unfortunately the finger of guilt was very quickly pointed my way as I realised what had happened. The night before, whilst rushing to get jobs done and thoughts of my awaiting chinese takeaway on the horizon, I hadn’t followed my normal OCD regime. I would normally count the hens before shutting their door for the night, but the night before, being the complete slacker that I am, I omitted to do this. For the next 40 minutes I was made to pay for that mistake as I chased the 2 renegades around, until they were back with their sisters, where they belonged.

Everything then settled down and I was cracking off my remaining chores for the morning, until I got to the cows and realised that they needed not only their bath feeder filling with water, but also their water tank needed filling up too. Oh, what a joy on a frosty morn! It took me until almost lunchtime to get the hosepipes thawed and sufficient buckets of warm water from our kitchen out to keep the cows happy until their tank was filled. That job being made so much more challenging as this welly wearer had to dodge a certain wife of mine, because wellies are not allowed in her kitchen and she’d marmalise me if I got caught!