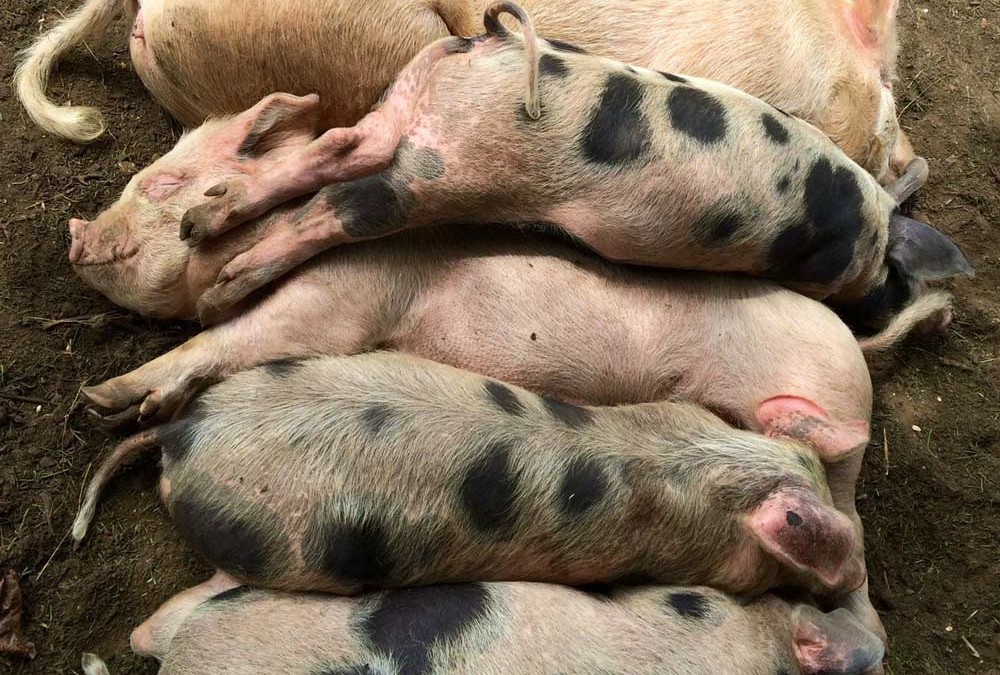 As you well know we get far too many mishaps going on around here and well, Saturday turned out to be one of those days. It was pouring down with rain, which didn’t help things at all and I was just coming to the end of cleaning out the stables when I glanced across towards the house and saw Wendy waving her arms and shouting. Now, because I had my old tunes turned up far too loud (one of the benefits of having distant neighbours) I couldn’t hear what she was saying at all, almost immediately I saw the problem for myself. You see, she wasn’t alone on the front lawn! It turns out that there were three little pigs playing with the dogs in the grass and had somehow escaped from their normal residence. I’m not sure if they had got waylaid on the way to the market, or had been looking for roast beef, but either way, I wish they had stayed at home.

I soon grabbed their feed bucket whilst Wendy shut the front gate, then with the temptation of food becoming far too great they were soon back home. In the end all I was left with was unsightly patches on our lawn, where three little piggy snouts had been digging and three disappointed border terriers, who were keen to play some more. I soon established where they had escaped from and fixed the fencing, so it wasn’t going to happen again in a hurry. I also realised that after recently charging up the battery for the electric fence around the pig pen, I had returned the battery to its home, but hadn’t restored power to the fence and so I am sure that my absent mindedness certainly aided there adventure.

Other than having an action packed Saturday with the pigs, this week has been an extremely busy one, with trying to progress things towards our projected date of July 4th for opening things up around here. That’s our Teashop, Shepherds Hut accommodation and Farm Trail. Just this week we have had  groundworks underway with water, waste and electric being installed in a variety of places, additional fencing and gates going in, electricians in the teashop finishing off, a decorator brightening up the outside of the barn and after five months of waiting, our additional electric supply has been connected up and completed. Having said that, apparently another team will be returning, with topsoil and grass seed, to restore our lawn outside the gate to its former glory.

We on the other hand have been involved with lots of day to day jobs that need sorting as they come along. Wendy’s jobs have included, replanting seedlings into pots in the greenhouses, weeding various flower beds, further tidying up inside the barn, bathing and grooming ponies, cleaning chicken houses and liaising with yet more local producers, in order that we have stock for the shop and in addition to that, she has been sorting the bulk of the domestics as she puts it, around the farm. I on the other hand have been involved in grooming cattle, watering trees, spraying weeds and nettles, filling and painting far too many holes where screw heads have popped through the plaster. I have returned lambs to mothers, checked and treated sheep feet, incinerated another bonfire, set more mole traps, given the Landrover its annual bath and cut endless amounts of grass, with a view to making the place look even more beautiful for Evie and Joe’s wedding on the 25th June. So, lots of normal routine stuff really this week!